PRO/AM: Starting Out In PRS Part 1: The Train-up

PRO/AM: STARTING OUT IN PRS

PRO/AM: STARTING OUT IN PRS

After an introduction to long range precision rifle in our multi-part story The Road to Rifles Only, we turned our focus to the world of amateur competitions. We wanted to know what it takes to get started and what it is about the sport that gets people hooked. Some people see the expensive gear, advanced techniques, and complex number crunching that go into pro shooting and think that PRS might be out of their reach. In reality, it doesn’t take much more than making that initial effort and using some basic gear to get out there and do it.

Earlier this year, we teamed up with established precision rifle competitors Tim and Regina Milkovich to get an idea of how one steps into the PRS space. We spent some time with Tim to talk about the basics while Regina mentored our amateur shooter, Carrin Welch, as she took her first shots in the sport. Regina and Carrin set their sights on competing as a team in the 2020 GAP Grind Pro/Am hosted by K&M Precision Rifle Training in Tennessee, the largest PRS competition in the US where about 400 shooters run through 20 stages in two days. As a train-up for the GAP Grind, a trip to Arizona for a local long range match and many range days were in order.

Before putting any rounds on steel, the gear has got to be right. One of the things that keeps people from getting started in precision rifle shooting is the idea that they need the most expensive rifle and gear available. Chances are, you already have a rifle in your safe you can shoot with. There are a range of divisions set up for different types of firearms — production, gas gun, and tactical — so there’s a division for just about anyone and the firearm they’re comfortable with. The essential gear list can be summed up as a rifle, a magnified scope, quality ammunition, a ballistic chart or app, and a rear bag. Carrin set up one of our Pro 700 chassis on a Defiance Machine Deviant Tactical action with a carbon fiber 6.5 Creedmoor barrel and began her training in Texas with Ryan Hey before heading to Arizona and to get to work.

Out at Copperhead Creek Shooting Club in Marble Falls, training with Ryan involved mostly basic equipment setup, to include zeroing the scope, setting elevations and windage, and practicing shots from different distances. Even though Carrin is an experienced shooter, shooting long range was a new skill and bolt gun a new platform for her. They started with the basics and worked on fundamental skills such as position building, sight acquisition, trigger press, running the bolt, and pre and post-stage checklists. They determined that some equipment changes were needed, which led to changing out her carbon fiber barrel for steel and swapping her scope for a Vortex RAZOR® HD 4.5-27X56 scope, the same one that Regina uses. Using the same scopes as a team helps with communicating holds since they’d operate with the same reticle. Once the new barrel and scope were in place, they used a chronograph to determine velocity with the Prime 6.5 Creedmoor ammo Carrin would be shooting and Carrin re-zeroed. Before traveling westward, Carrin built some confidence with a lot of dry fire practice and some solo range days, working on the fundamentals and solidifying her skills before the two upcoming matches. 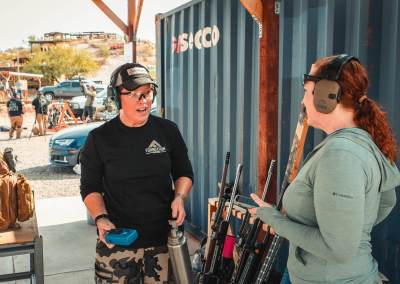 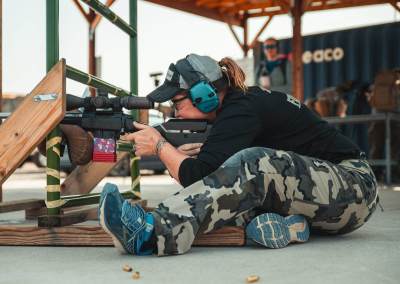 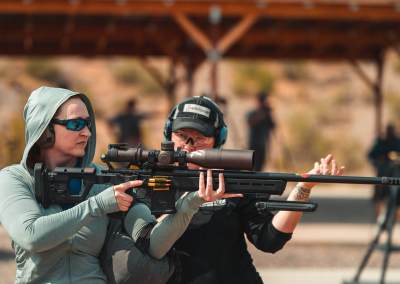 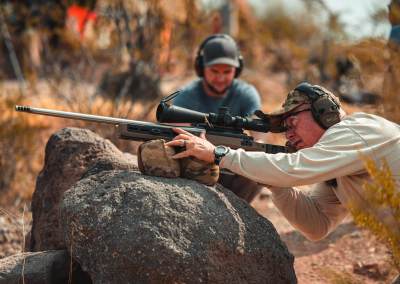 After the initial set up, it was time to put practice into action at the Cowtown Range in Peoria, Arizona. After settling in from travel and knocking out a practice day at the range, they traveled to the AZ Long Range PRS club match. Local club matches tend to be a little more relaxed than 2-day national matches and are a great training opportunity for shooters new to the sport. Shooting her first match at the Milkovich’s home club was the right introduction to the sport, and Regina and Carrin were able to shoot together for the first time. As the Pro, Regina was able to assess Carrin’s skill level and start to establish the kind of communication flow that would be necessary when shooting the Pro/Am. As the Amateur, Carrin received help from Regina throughout the day and learned a lot from watching all the shooters in their squad.

Just because local club matches are more relaxed doesn’t mean the stages are easy, especially with the AZ Long Range PRS crew. Every level of shooter was represented at the match, from the absolute novice to sponsored pros. Stages throughout were designed to test fundamental long range skills and challenge even more experienced shooters. Shots were taken from prone positions, modified prone, standing, kneeling, and sitting, off of props and even unsupported. There are a few left-handed shooters in the AZ club, including Regina, so there were definitely a few stages that required support side shooting. 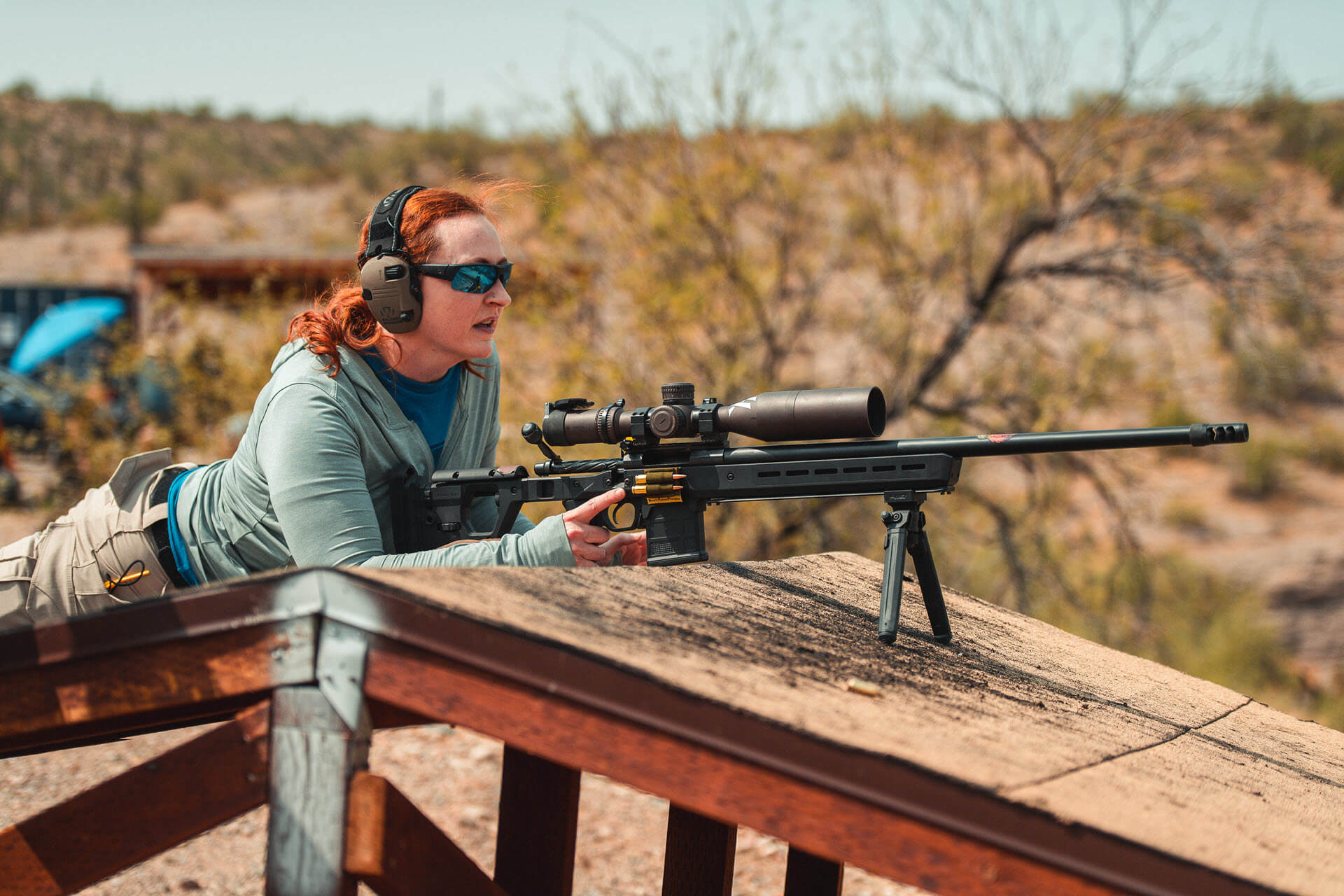 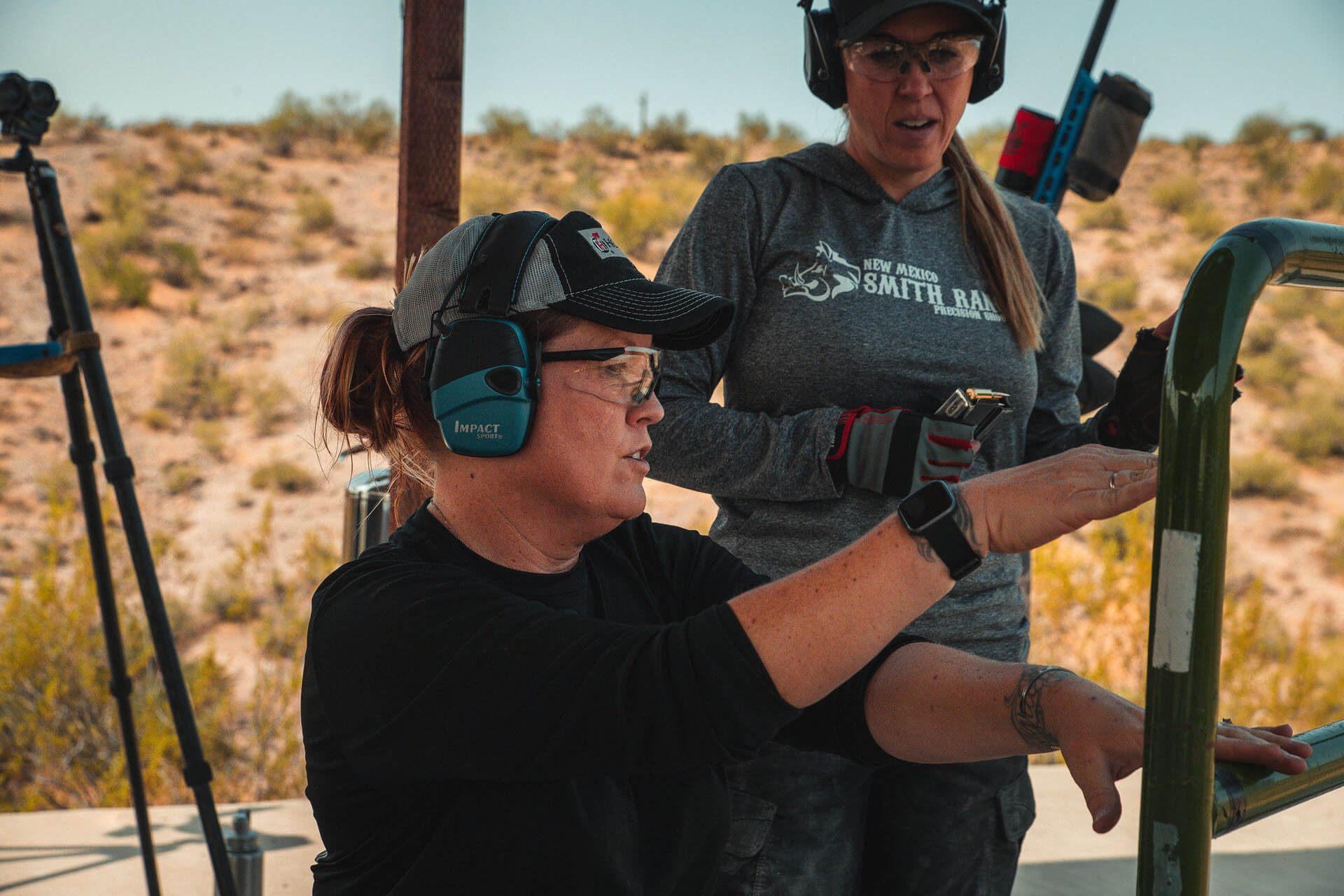 Outside of shooting the gun and hitting targets, there’s a lot going on at the range. Matches will have multiple stages, and shooters move as a squad with all their gear from stage to stage. Keeping shooters in squads helps to move the shooters through the match evenly, but it also encourages camaraderie. As this match day progressed, Carrin was able to ask for and receive advice from the other shooters in their squad. Every shooter has a pre and post stage checklist that helps them keep track of their gear from stage to stage and to be ready for the next stage. It includes everything from getting your DOPE (data on previous engagement), to setting your scope for the first target, to getting on the line. Along with the PRS and NRL sport and safety rules, every range and club have rules for safe shooting and handling. Each stage presents a different CoF – course of fire – that tells you what target(s) to shoot, the distance(s), and shooting position(s). While live fire practice at the range and dry fire practice at home will improve a shooter’s skills and familiarity with their equipment, shooting in a match provides a level of experience that can’t be duplicated in those controlled environments. 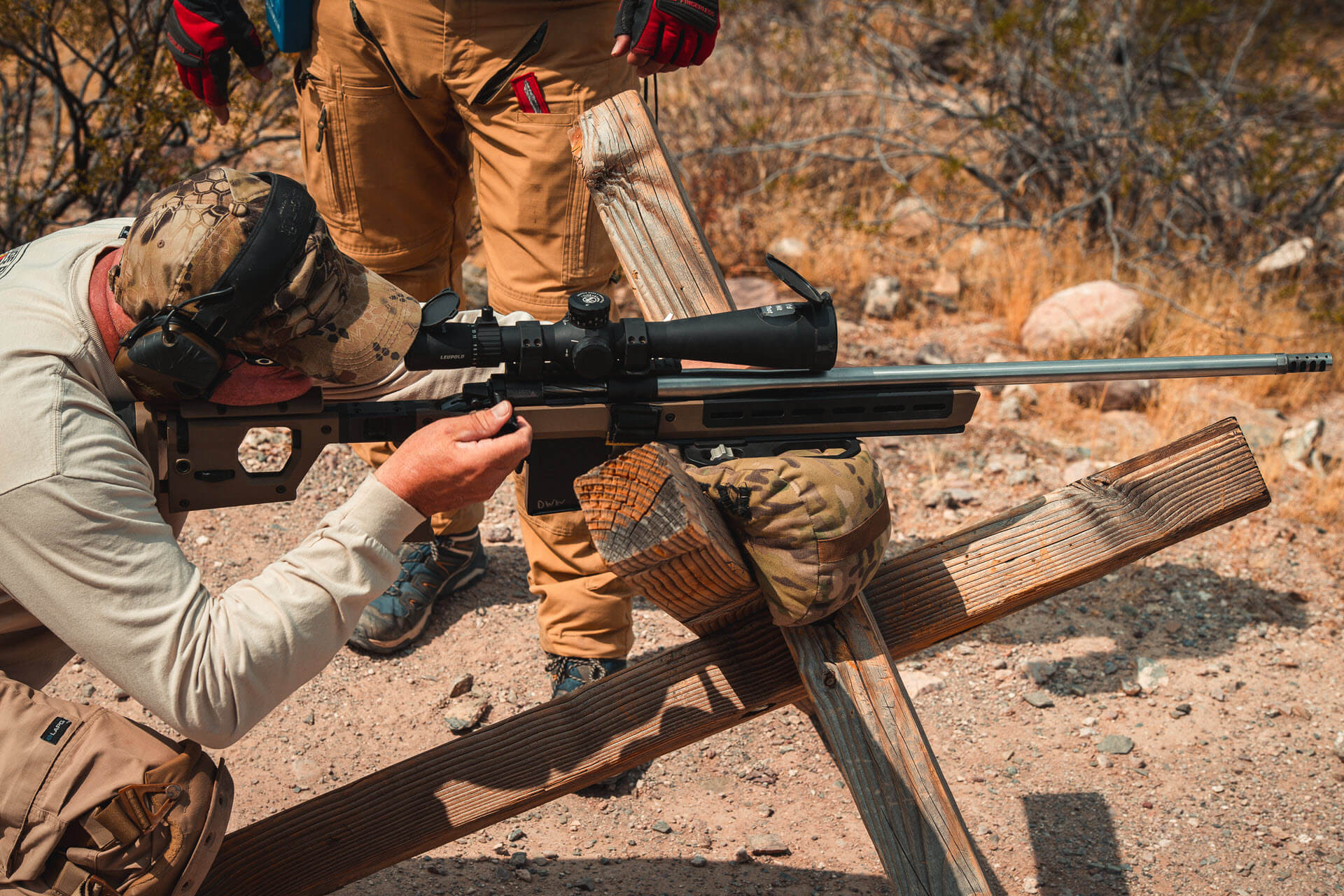 With the AZ match under her belt and plenty of homework to focus on, Carrin was hooked on shooting long range and ready to take on the GAP Grind. From honing positional work and understanding her DOPE, the AZ club match tested Carrin and proved to be a great introduction to precision rifle competition shooting. Regina was able to assess Carrin’s skill level and come up with a training plan to get her ready for all 20 stages of The GAP Grind Pro/Am and take her next step as a competitor in precision long range shooting.