Pack out, saddle up, gain some elevation.

Pack out, saddle up, gain some elevation.

Most seasoned hunters would agree that, many times, hunting isn’t easy. If it was, everyone would do it. Make that a bull elk hunt on horses, with over-the-counter tags, and the added factors of it being a do-it-yourself trip with no guides, conducted on public land, using self-sustaining loadouts, and without the benefit of horse wranglers. All at temperatures in the single digits, with a low of -17F at night. The word easy definitely doesn’t apply.

Recently, a few guys from Magpul and some friends set out into the mountains of Northern Colorado for a high-altitude, horseback elk hunt. The location of the hunt ended up being just inside the northern border of Colorado near Dixon, Wyoming. The camp altitude was at least 7500’, while most of the hunting was done above 8000’.

This wasn’t the first time they had undertaken a complex hunt of this kind. But with record cold and snowfall for this time of year, the weather made things more challenging and added new variables to the mix. To start, multiple pack-in trips were required due to the limited ability to move quickly and carry the cold weather gear. Also, the horses didn’t have the usual grass to graze upon, so extra feed had to be carried in. With dangerous road conditions and a heavy loadout, trailering the horses also took longer than expected. As a result, the pack-in was barely completed just as night set in. Digging out over a foot of snow before hitting bare ground, camp setup was accomplished in the dark.

On the trip in, the snow and treacherous footing made things a lot more dangerous. The footing made the horses more likely to stumble, and that led to some additional trouble keeping the loads stable. At one point, one of the pack horses being led stumbled and a pack slipped off and hit the ground, causing one of the other horses to act up and give its rider a cold weather rodeo. They managed to calm both horses, and the hunting party got them re-packed and they continued on. 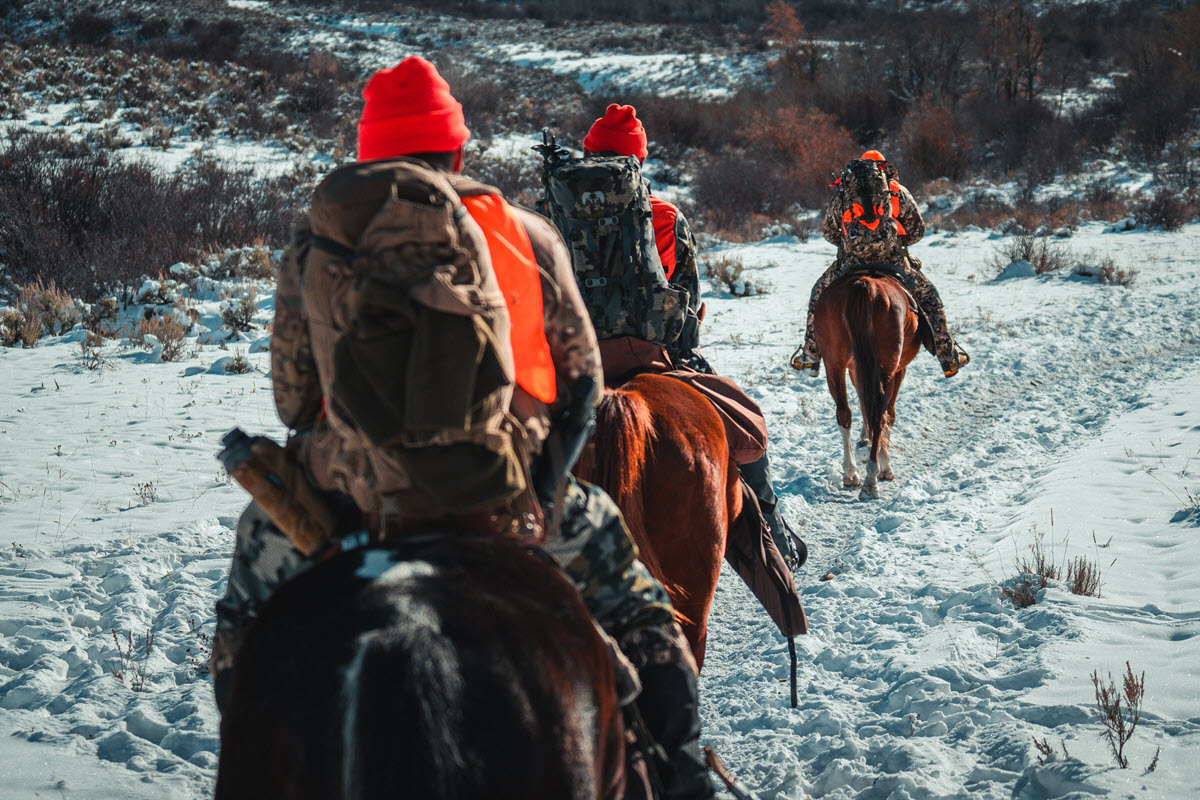 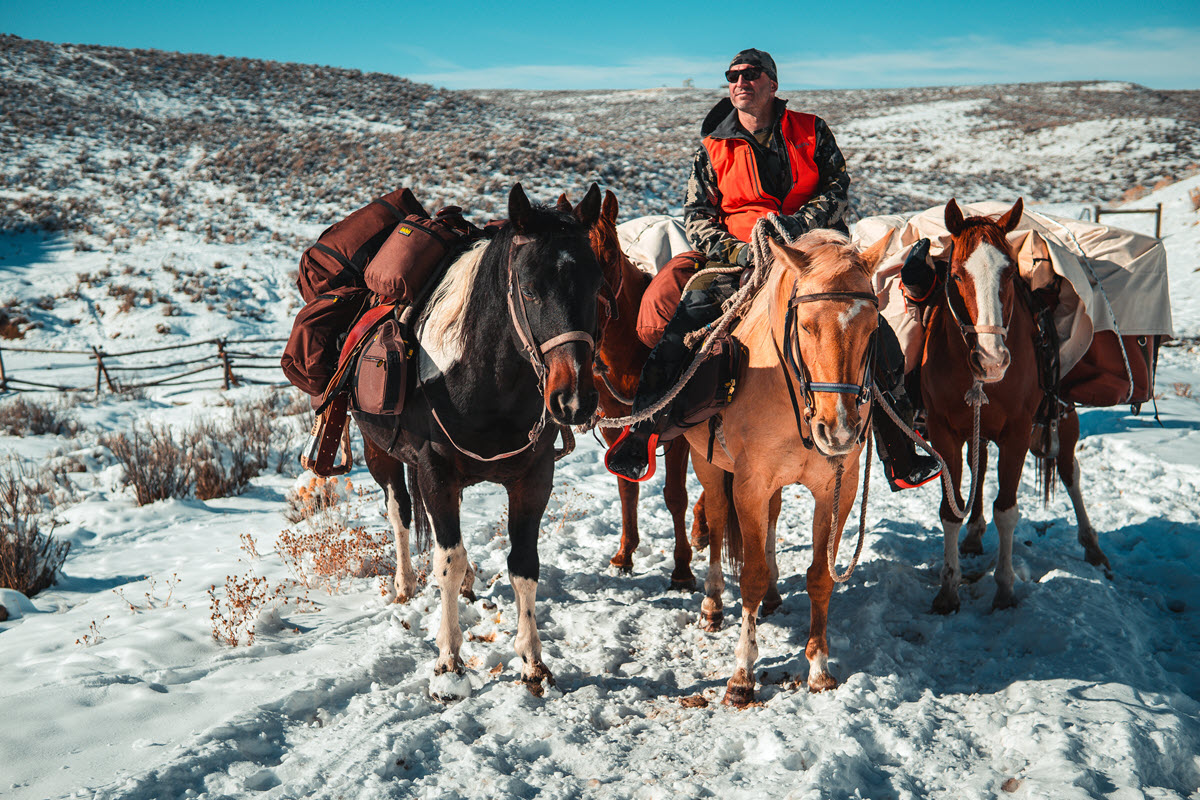 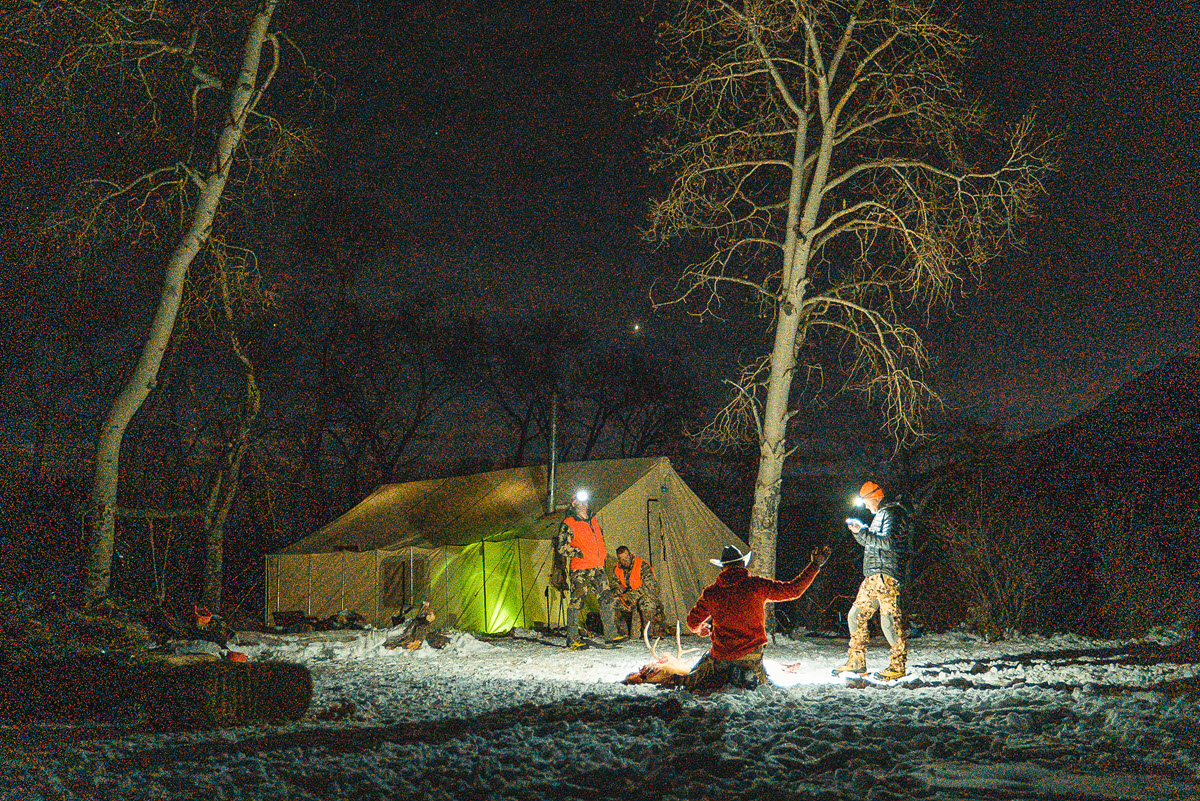 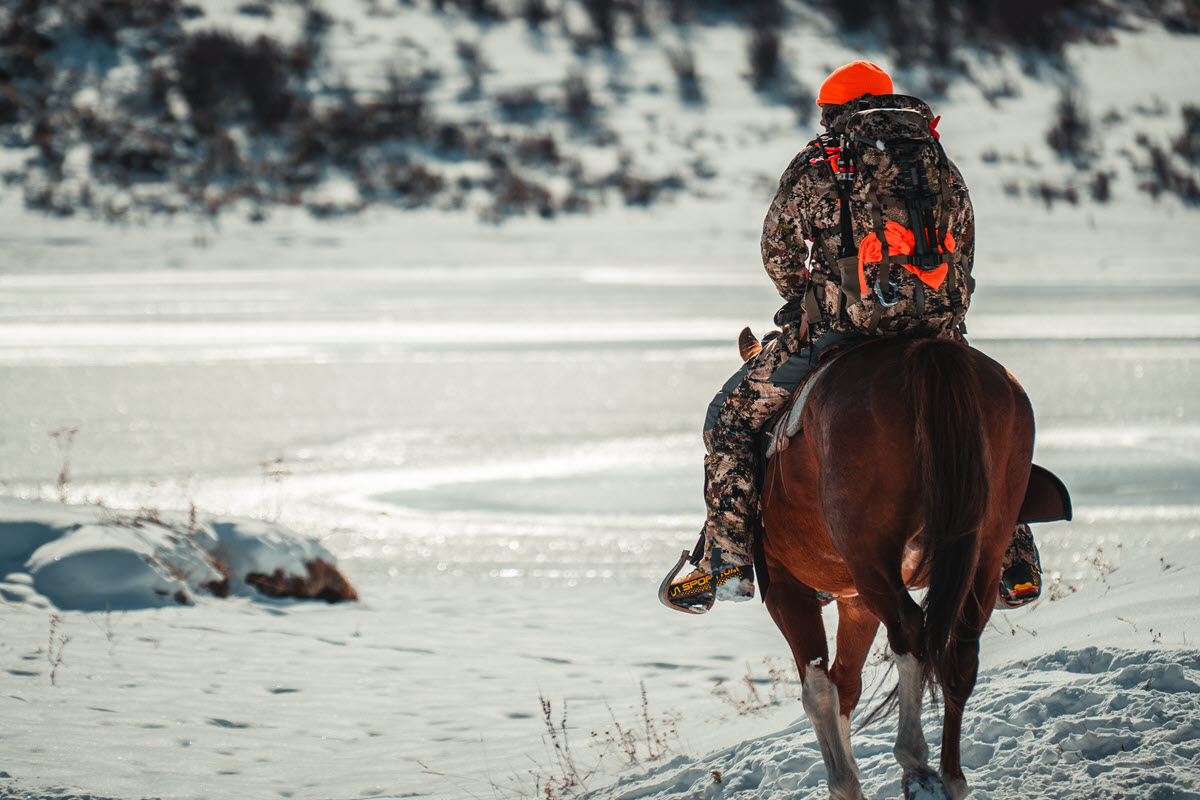 The first day out was spent scouting their plan based on the environmental conditions and the movement of the elk. Everyone on the trip had a bull tag and was in search of just the right animal. When taking on a hunt with these conditions, the route planning is crucial, and with a larger group than in previous hunts, there was some homework to do. Knowing that the harsh weather had pushed the elk to migrate earlier than they have done in the last 30 years, the idea was to pick off some stragglers or bank on the weather to break and wait for some to return East. Adding complexity to this was the fact that this migrating herd had encountered continuous pressure from hunting due to its movements on public land, making the chances of finding the right bull a lot harder. Nevertheless, a few promising locations were identified and mapped out using the OnX app and other mapping digital and paper tools. With a plan in hand and in mind, everything was good-to-go for the next morning, and the hunters made one last trip out to the trailhead for more horse feed.

Getting down to business, the next four days were spent hunting. The hunting party got up before dawn, saddled up their horses, and rode until they reached a tie-up spot close to their planned observation positions. From there, they hiked the rest of the way and established a position where they felt they would have the best overview of the area. To avoid overheating and then freezing, they kept their hiking clothing to a minimum, hiked in to their observation positions, and then added their layers before sitting down to glass the hillside. Staying put for hours with the temperature below zero, the crew would return to camp around lunch for a hot meal and to set up a gameplan for the evening. 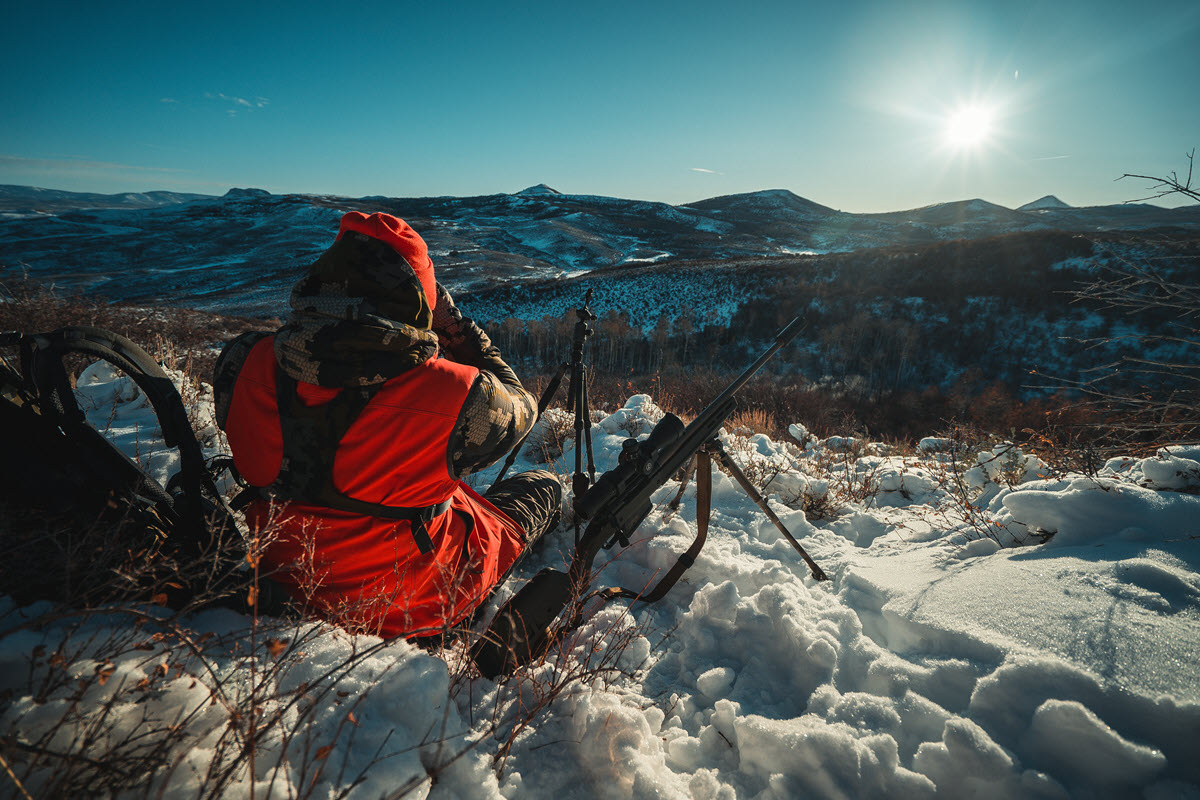 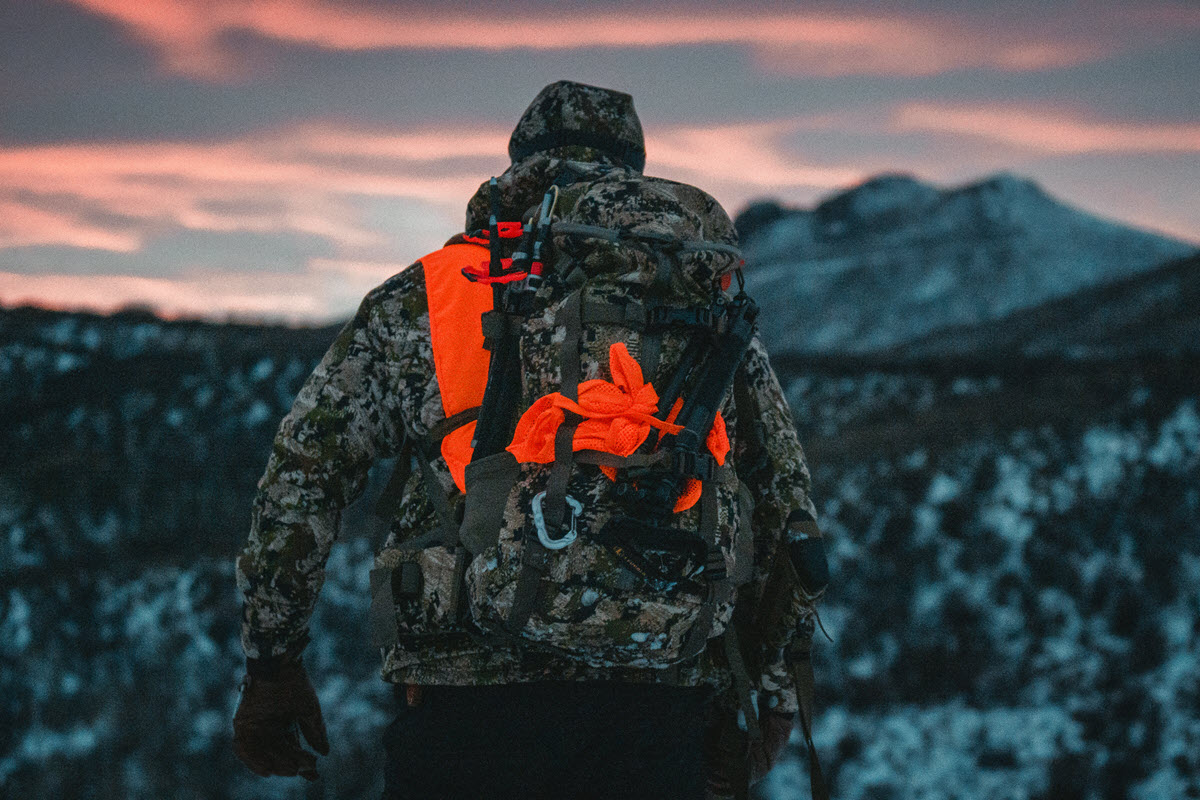 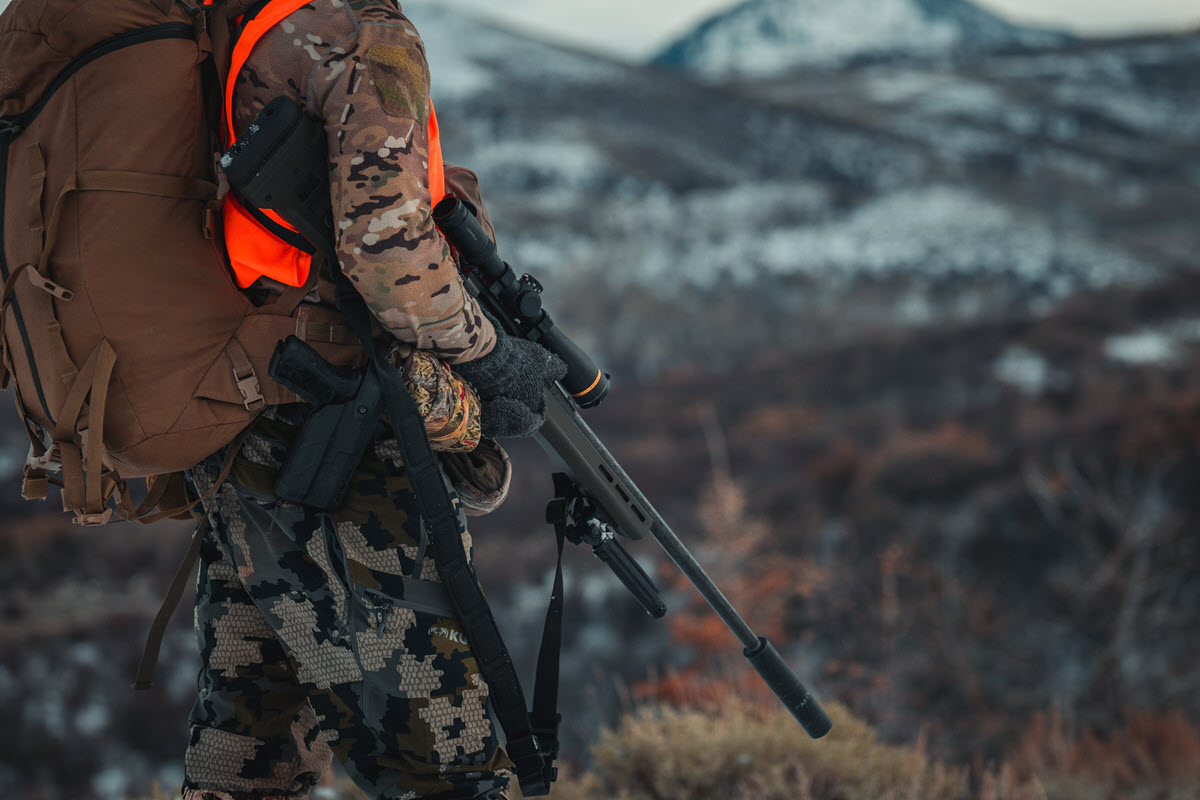 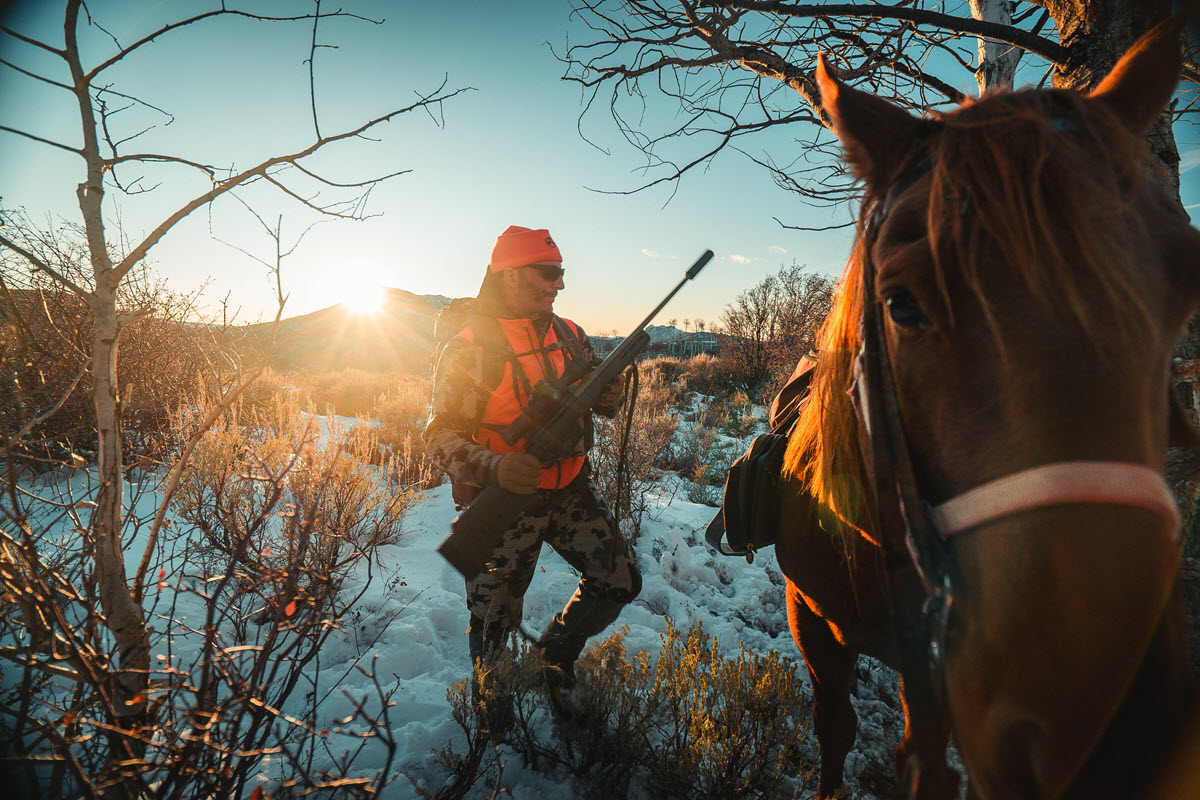 In the end, they spotted more than 200 elk, but most were spikes and cows. Just as they had thought, the weather drove the elk out of the area and the ones they saw were either far too distant or not the ones they’d come for. However, it did bring in the mule deer in early…and there were a lot of monster mule deer. They weren’t hunting for a muley though. One of the party took one shot at a bull and was successful. It was a raghorn, a 3×4 and nothing enormous; but, it was the only legal bull they’d seen all day. In the end, most of the party had to leave empty-handed. When the time to hunt was over, they packed up and packed out. Not exactly the results they’d hoped for, but still a lot better than not having made the trip. 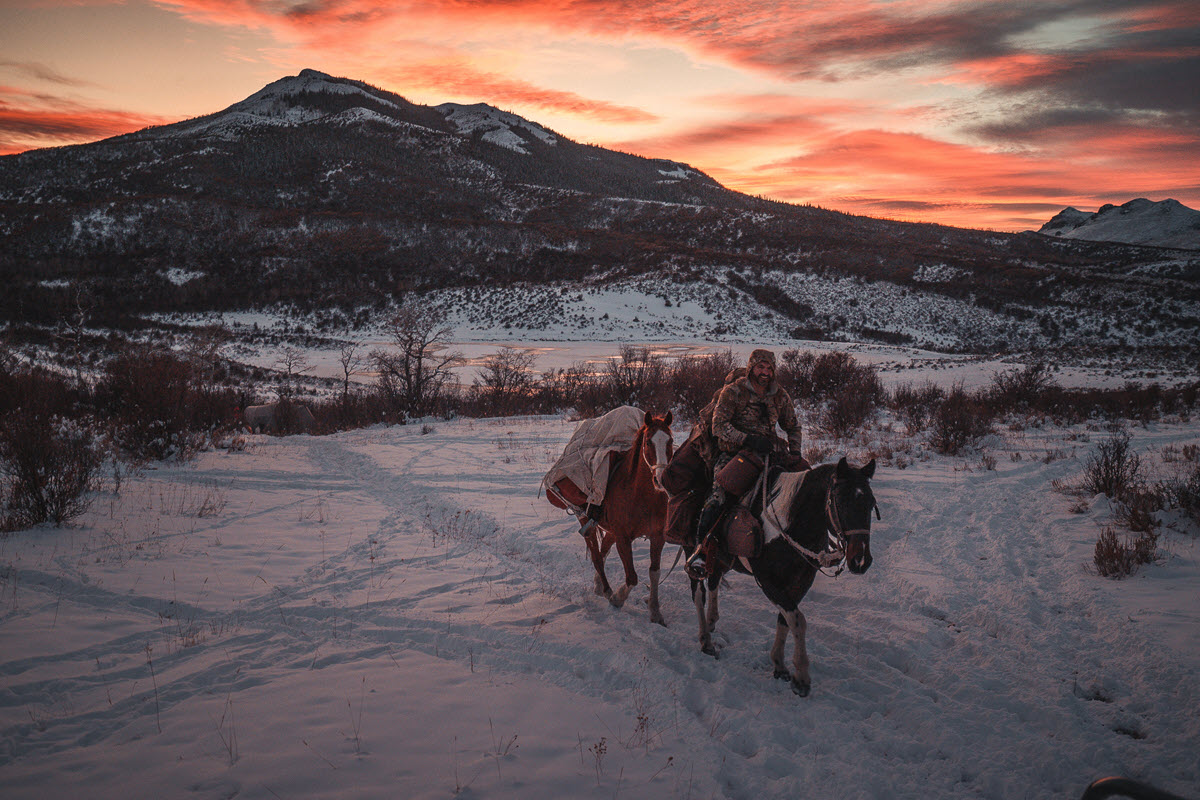