The American bison. Also known traditionally and colloquially—but not necessarily correctly—as the American buffalo. It’s an iconic animal that made its way from Asia to Siberia and across the Bering land bridge to North America more than 100,000 years ago. Its migratory herds once totaled tens of millions of animals which ranged from Canada to northern Mexico, with the greatest percentage making the Great Plains of the United States their home. They thrived there for millennia until the arrival of man.

The relationship of the buffalo and humans has been one-sided since they first came into contact hundreds of years ago. The buffalo herds were integral to the lives of a handful of Native American tribes who depended upon—and coexisted with—them for many generations. However, the westward expansion of Americans and pioneers from the east during the 18th and 19th centuries was a completely different story. The opening of the western frontier and all that man brought with it nearly wiped the buffalo out of existence. Both the government and the private sector acted together to eradicate the great herds to satisfy commercial needs and to crush the Native American resistance to the takeover of their lands. After less than two hundred years of the arrival of settlers from the east, the great herds of American bison were effectively extinct in most parts of North America by the close of the 19th century. 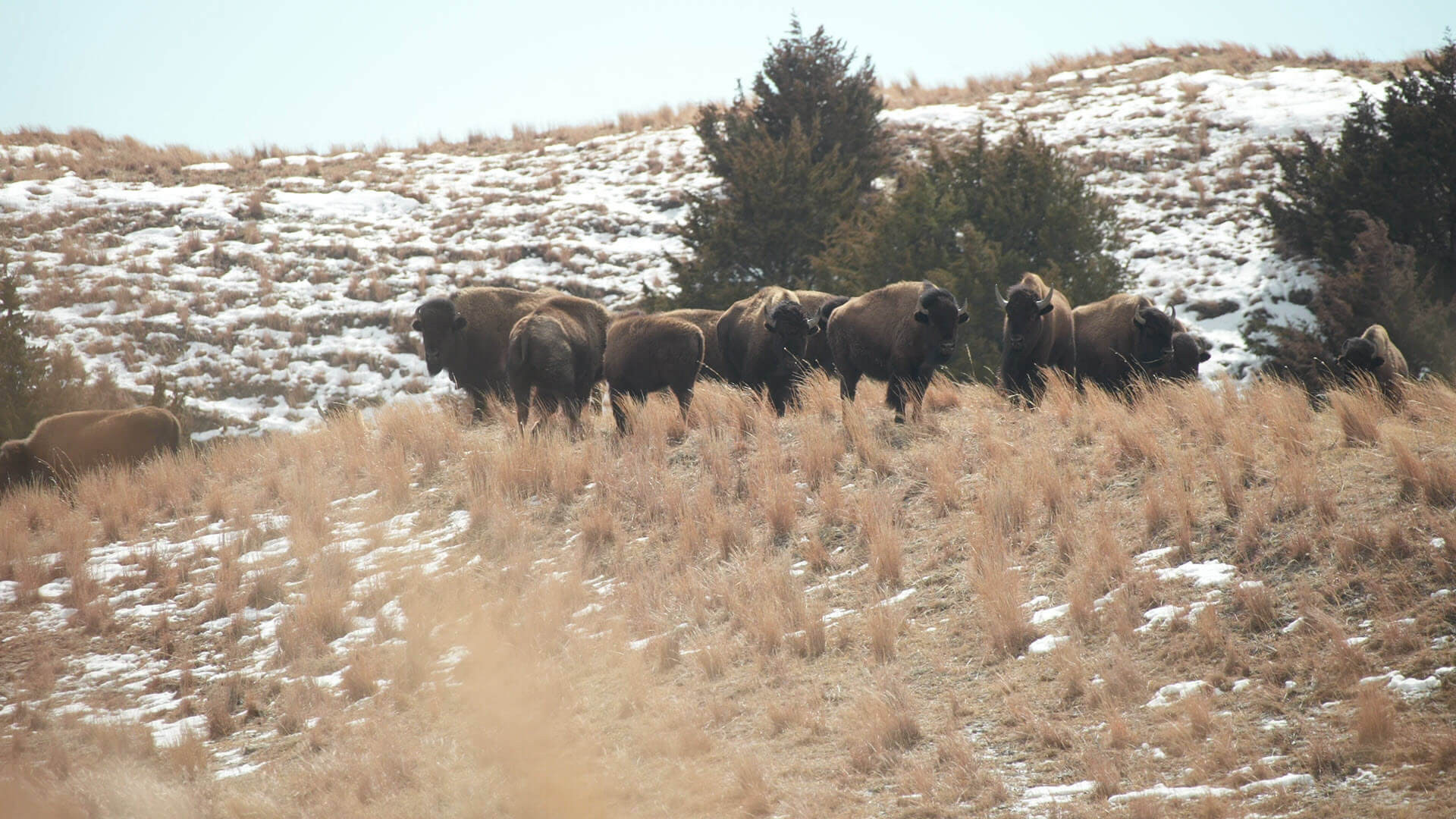 Herd of Buffalo in Nebraska

With its populations now measured in mere hundreds, conservation became the public and private endeavor. Over the course of the next 100+ years, both wild and farm-raised buffalo staged a sort of a comeback. As a result, the buffalo population today is approximately 500,000 and growing. Most are raised on private farms or as a food source, and many are allowed to range free on large ranches in a handful of states. While they’ll never have the ability to migrate freely and repopulate the Great Plains in the numbers they once reached, many still live their lives naturally and away from the eyes of man. However, like most game animals–especially larger ones–managing the population so it has the greatest chances of long-term success includes making impactful changes to wildlife populations through herd monitoring and culling, habitat management, and sustainable utilization. Proper population management is achieved through a variety of means, which includes sustaining the needs of healthy animals, removing ones with unhealthy genetic or disease dispensation, and maintaining the proper ratio of males to females for proper breeding cycles and reproduction. Hunting is one of the tools used to effectively manage herds by removing animals that could potentially be a detriment to the herd. Hunting small numbers of bison on private land is absolutely one of the necessary keys to success in a program to grow and sustain a healthy herd. It’s also extremely rare.

With the history that surrounds the largest land mammal in America and its relationship with humans, having an opportunity to hunt one doesn’t lack in significance or difficulty. Early this year, Tray Ardese, a member of the Choctaw Nation and the Director of Government and International Affairs at Magpul, was given the honor of being selected to hunt one of these American legends in Nebraska. As a volunteer with both Honored American Veterans Afield and Outdoors Network International, Tray helps guide hunts that serve both the veteran community and our younger generation in learning about the outdoors. This time, Tray was the one being given the opportunity to be on the receiving end of an experience of a lifetime. An avid hunter, Tray is particular about only hunting animals he can bring home to his family for food, and he considers it one of life’s great honors and blessings to be able to turn the results of his hunts into a majority of the meals served in his home.

Accompanied by Guide John Howell, Gary Lewis and Tracy Wilson, he set out to find a herd of buffalo somewhere in the 40,000 acres of hills around the Dismal River on John’s family ranch, with hopes of finding, stalking and taking one of the small handful of buffalo that John allows to be taken there each year. Trying to locate and get close enough to an animal to harvest takes time, patience, and more time. Over the course of three days, Tray spent hours studying the terrain, driving to various vantage points, finding groups of buffalo on the move, and stalking and then being outrun by them. Despite their size, buffalo are acutely aware of their surroundings, and as Tray found out, an entire herd can move away rapidly at a moment’s notice for no apparent reason at all. 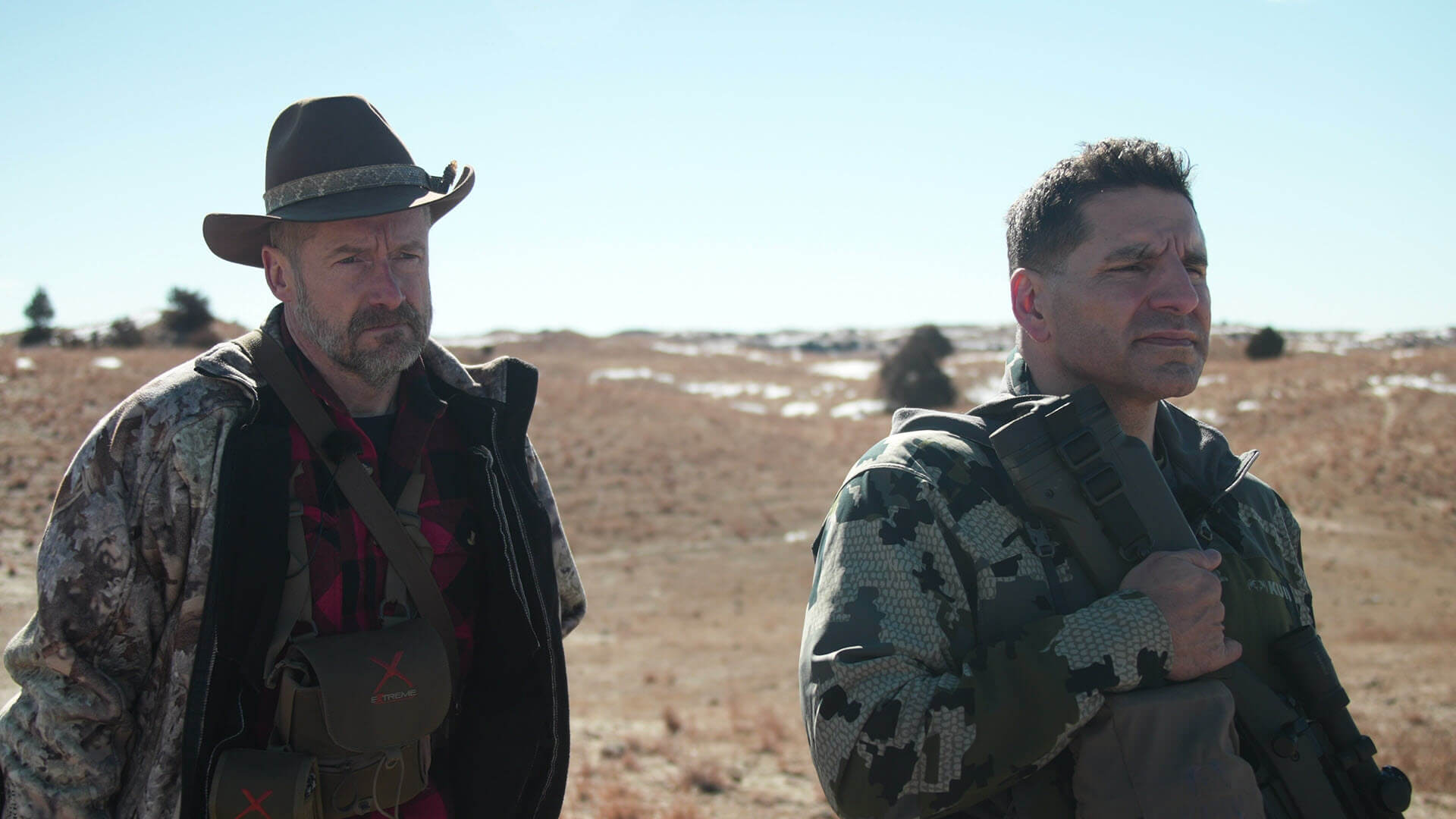 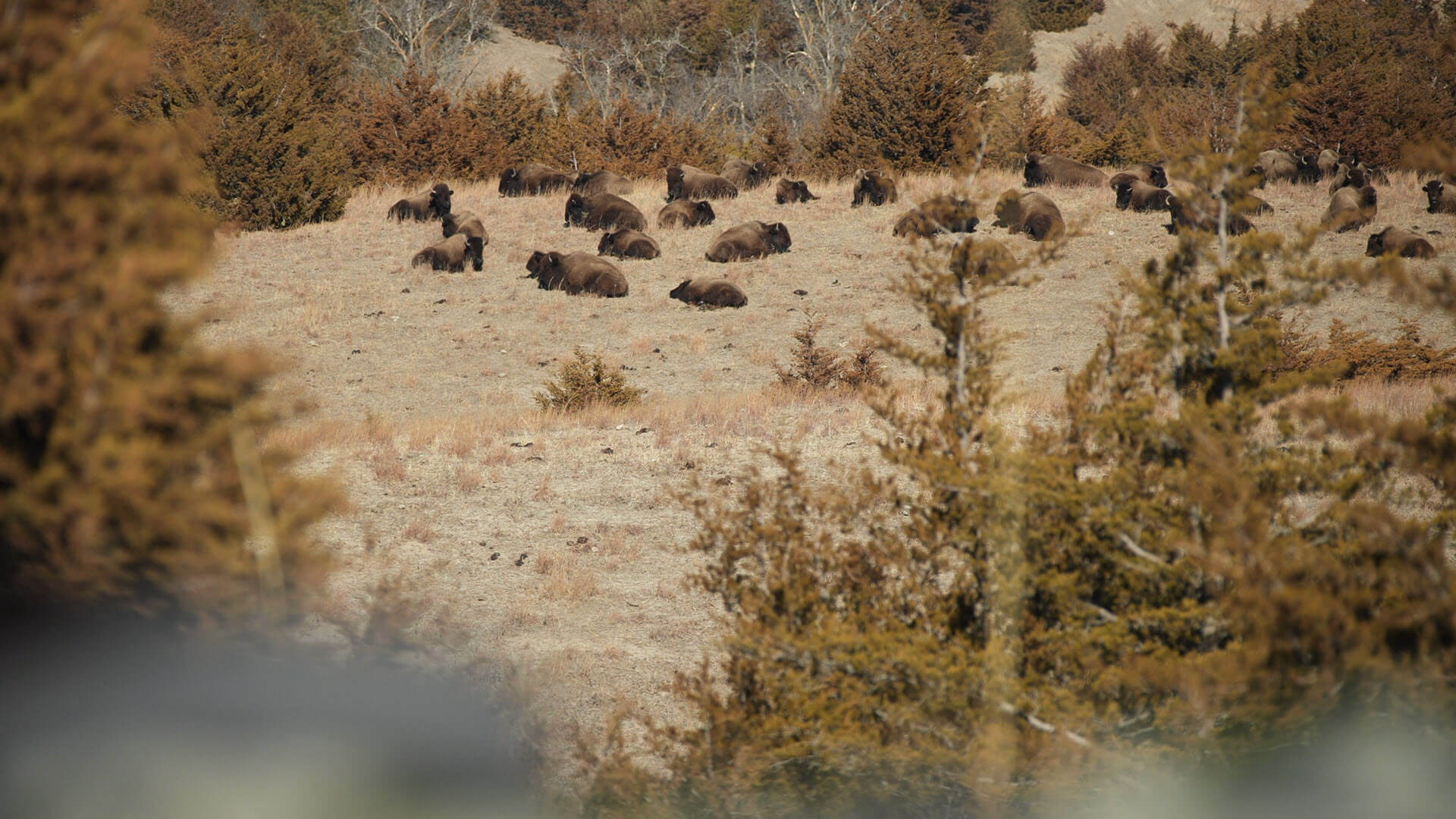 On the third day of his trip to Nebraska, with his 300 Win Mag outfitted with a Big Horn Action in a Magpul Hunter 700L stock, and equipped with a Leupold VX-6 rifle scope at the ready, Tray’s group spotted a herd that didn’t spook before they could get within a mile or so. The group parked the truck and carefully stalked for a ¾ of mile to close the distance before getting into a low crawl for the last hundred yards of the stalk. They took a position just out of sight at the top of a hill. On the other side was a small herd of 25-30 buffalo. With an ideal mix of cows, calves and young bulls in this herd, they decided to pass on this bunch and follow them down a buffalo trail instead and hope to find a herd with an animal suitable for culling. This took them east, where they encountered a larger herd.

Searching for the perfect shot, the group found themselves in a game of chase with this second herd of about 40-50 buffalo. They started west, following the buffalo trail, where they eventually crossed the Dismal River, and they continued moving, shadowing this new herd and evaluating at potential cull animals. In a sitting position, Tray finally had sights on a bull in the middle of the herd. It was the cleanest look he’d had throughout the day, but the bull was surrounded by cows, with a calf in front and about three feet to the right. Nebraska is “where the wind is born,” and with 15-20 mph winds that were gusting up to 30mph, he held the shot rather than risking any sort of collateral damage. When the herd of buffalo began to move, Tray fixed his sights on a different animal with inputs from John. It was a dry cow that would no longer give birth to more calves, and John agreed that this would be the best animal to take to positively affect the health of the herd. Tray sighted in, set up for the shot, and as the herd started to move en masse, he took it at just under two hundred yards with a stiff crosswind. 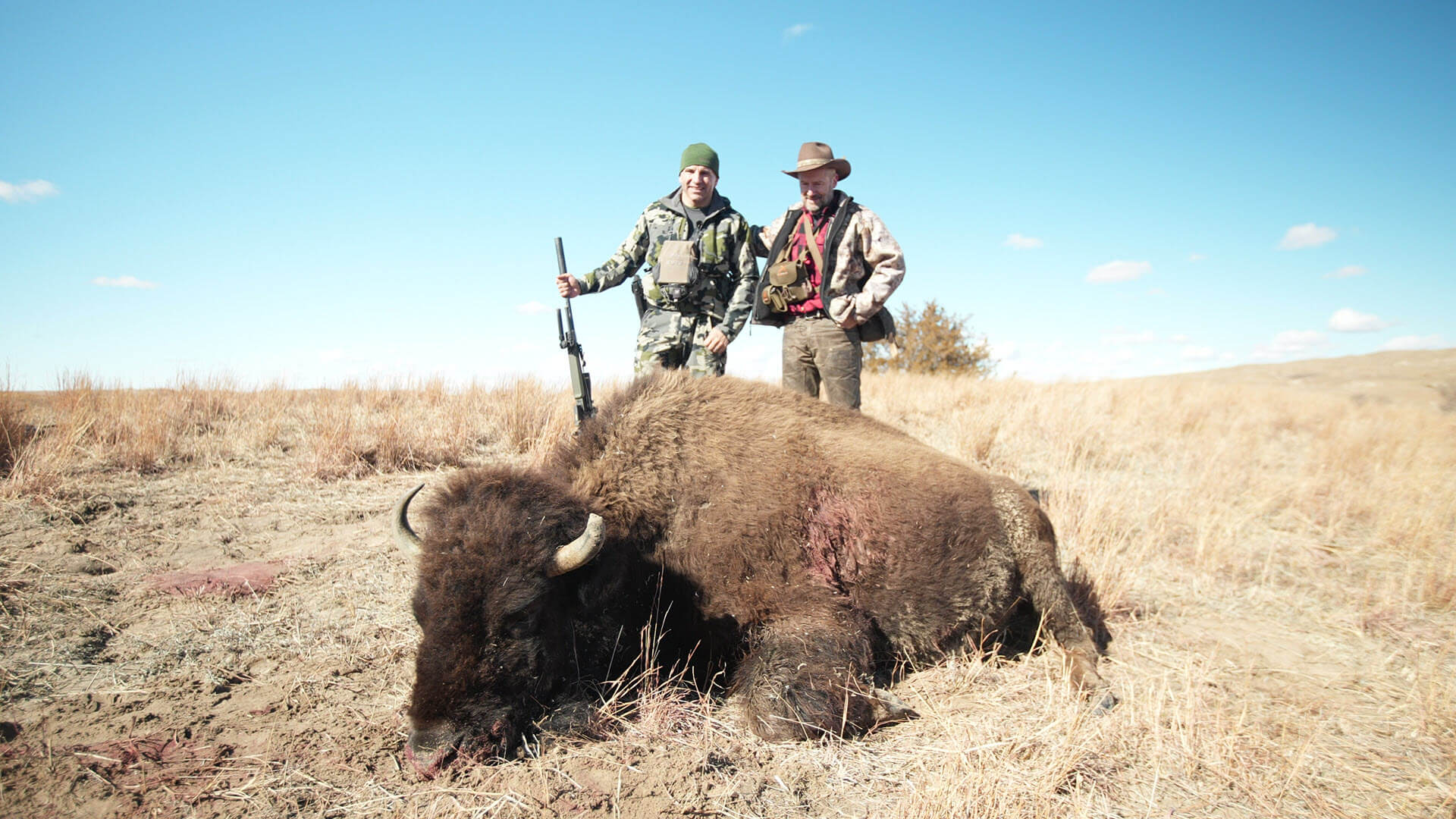 A short walk down the hill from the point of impact, they found the lifeless cow in the open and they proceeded to assess it and dress it for return back to camp. At about 1100 pounds, she was on the larger side for a female buffalo. Gutting it was unlike any experience in cleaning an animal that Tray had taken before. The internal organs themselves weighed approximately 400 pounds, and he couldn’t get his arm all the way down to the windpipe with such a large sternum and chest cavity without opening it up with a saw. Once the innards were cared for, they used a winch to get the cow into the truck and headed back to the lodge where they would hang it, skin it, and break down the meat. Tray set aside the skull for a euro mount and the hide for tanning. 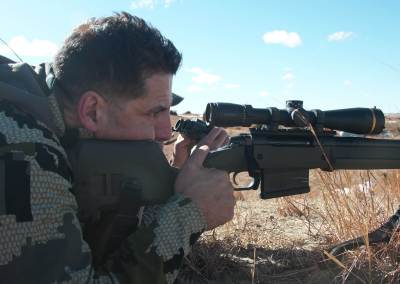 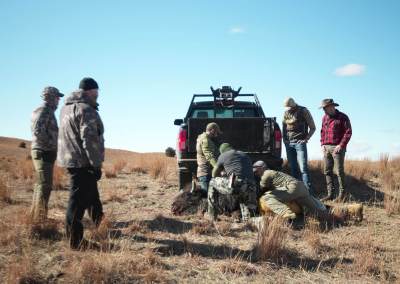 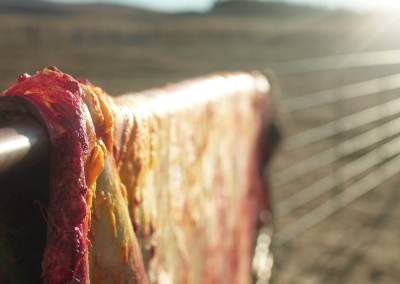 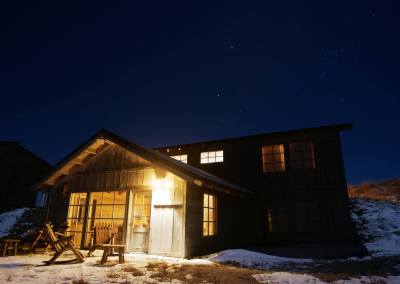 The Lodge at the Dismal River

As is his propensity to take opportunities to give back to others when he can, Tray’s had the meat processed and gave a large portion of the nutrient-dense meat to people in his community. The rest, he drove home to Oklahoma in his truck to feed his family for a long, long while. With his many years of experience with hunting, they are a family that has consumed wild game of all types, and they are appreciative of the sacrifices that the animals made to end up as sustenance for them. They give open and prayerful thanks each time it is served. In the end, the American Bison that Tray harvested and took home was unique, but not in the respect that he showed for it. Tray’s reverence toward the animals he harvests is heartfelt and is a product of his family’s lineage. In this case, the buffalo, which once suffered great abuses to its species in the name of advancement, has once again been made a part of a respectful coexistence with man.