At War With Wild Boar

At War With Wild Boar

If you were going to design an effective invasive species, there are some key characteristics that would determine whether it could thrive in its new ecosystem long enough to become a real threat. Most animals brought to a new environment won’t proliferate because their physiology and instinctual behaviors don’t align with their new location, and they can’t adapt quickly enough to establish a foothold, much less dominance. They survive as long as their wits, their food and the climate let them, and then they are gone.

However, there are a few unique creatures that are ideally suited to succeed as alien invaders: they can survive in diverse climates; they have existing features and traits that give them advantages over other organisms; they’re mobile enough to evade predatory and environmental pressures; they can vary their diet to consume whatever is available to them; and they can reproduce quickly and in large enough numbers to expand their population despite predation, food availability, and changing habitats.

In other words, if you set out to design the ideal invasive species, you’d want to create something like the feral pig. And if you were to choose a location where they’d inflict maximum damage, you’d choose the United States. It would make great fiction if it weren’t already true. 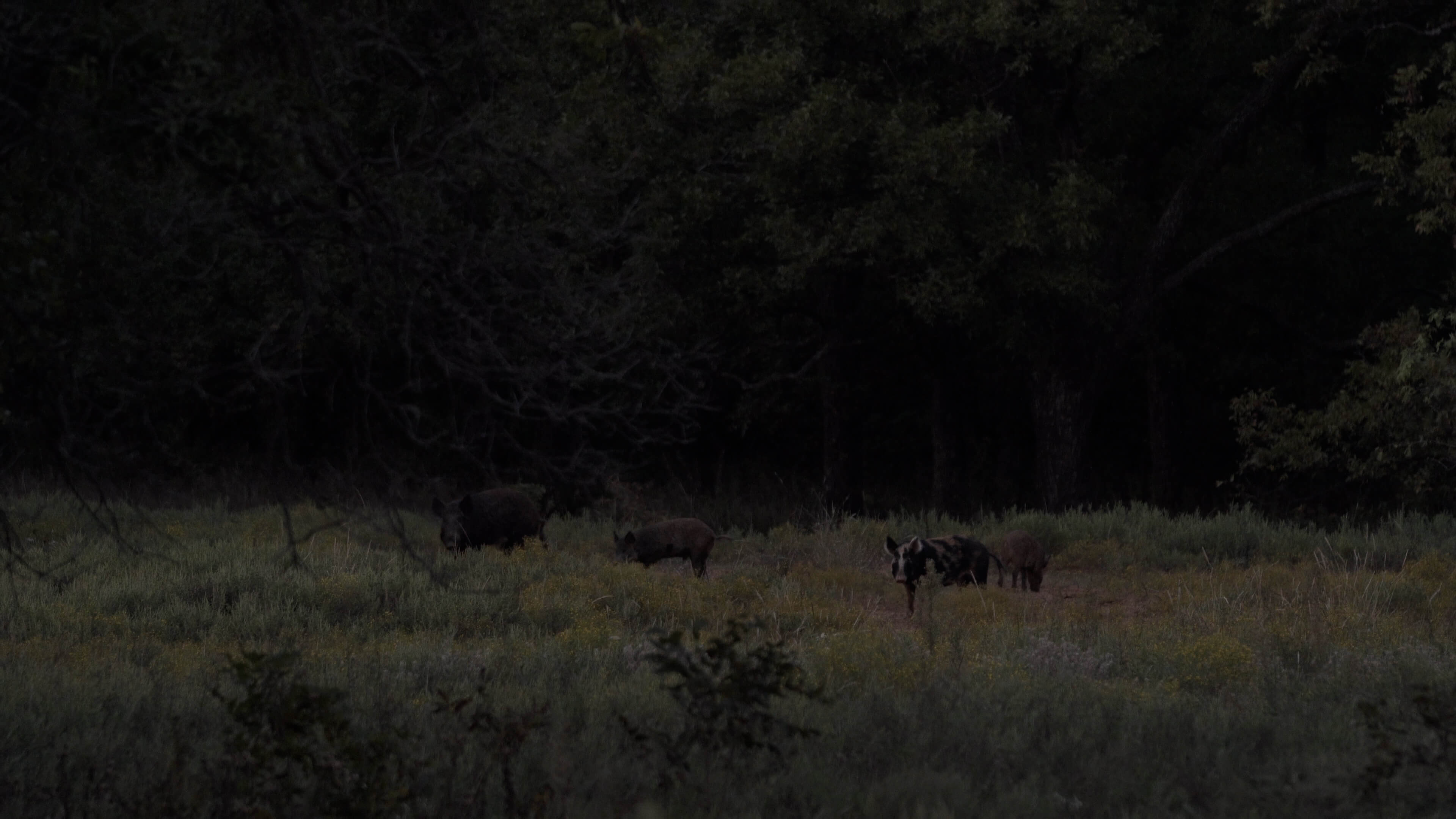 A group of hogs in Waurika, Oklahoma

Domestic pigs came to North America with early settlers as early as the 15th century, and even earlier to Hawaii and other islands where colonists arrived and didn’t leave. The pigs were a food source that was relatively easy to care for and almost self-sufficient in a free-range environment. They also reproduced profusely. Much later, in the twentieth century, Eurasian and Russian boar were also brought to America for sport hunting. These pigs were, in many ways, the perfect domestic animal, and they could be depended upon as a steady source of self-replenishing food and entertainment.

The swine transported to North America that escaped or were allowed to roam easily survived the harshest conditions that most of North America threw at them. Over the centuries, the feral versions of these first pigs, numbering in the hundreds of thousands over the years, became the dominant, multi-faceted, destructive beasts that we can now find rooting their way through most of the United States—and, really, the entire world, other than Antarctica. The resulting wild swine quickly adapted to a mostly vegetarian diet, but they didn’t have issues with being carnivores and scavengers when they needed to. They were—and still are—opportunistic feeders, and their senses, intelligence, and natural abilities have made them virtually unstoppable. They have become one of the widest-ranging mammals on the planet, and one of the most destructive; sounders routinely sweep through entire crop fields in one night and leave them in ruins. And that’s just the beginning of the issue.

Humans have done little to stand in their way, and our laws and control methods have not kept up with the increasing threat. To make things worse, the popular cottage industry that exists around hunting hogs has led to a greater spread of the populations by introducing them to areas where they had not naturally progressed. Wild hogs have been consistently trapped and moved into other regions and states where hogs were not traditionally established, and their release or escape for hunting purposes has contributed to further population expansion in the US over the last century. While more stringent laws exist to prevent this spread, the initial movement of wild hogs into new zones has allowed them to establish a footprint that wouldn’t have existed naturally. As a result, the U.S. Department of Agriculture estimates that the feral swine population has rapidly expanded past six million, with some estimates putting their number at over nine million.

The ecological impact due to feral swine includes crop decimation, land fouling, infrastructure destruction, disease, and the elimination of other species. These effects are not new; they’ve existed since they were first given room to roam freely. However, the spotlight on the extent of their impact wasn’t especially bright until recently. With the most accurate records only dating back to the 1980s, feral swine have been reported to some extent in 48 states—though they are more than likely established as “residents” in at least 38 now. They’ve been especially destructive in the southern and western states, steamrolling through them like a giant sounder of eating, rooting, living rototillers that spoil the land they touch.

Controlling them has been a conundrum for humans. While most see them as a destroyer of property, resources and good things totaling upwards of $2.5 billion, there are many that see them as a game animal that’s fun to pursue, kill and consume. There are entire industries built upon the latter idea. Chances are that you’ve seen footage of hunters gunning down hogs from a helicopter or a blind and thought “That looks like an effective way to control them” or simply, “That’s gotta be a lot of fun.” While the fun factor is undeniable for those who enjoy hunting, shooting hogs in all capacities has hardly made a dent in the army of hogs currently bedding down across the United States. The good news is that most of the country has been alerted to the problem, so virtually every affected state has established some sort of management methods to change the way we fight the wild hog invasion. 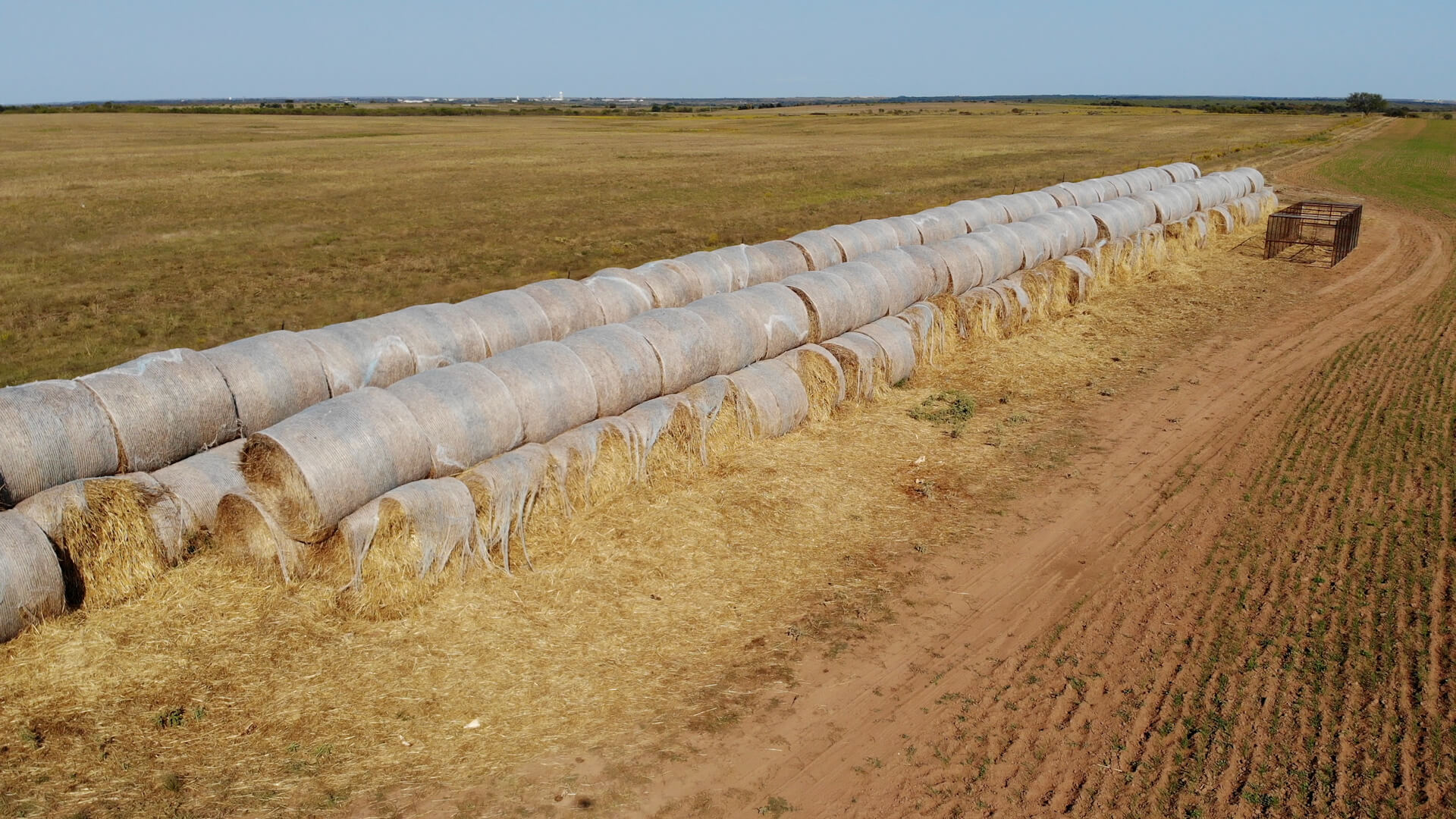 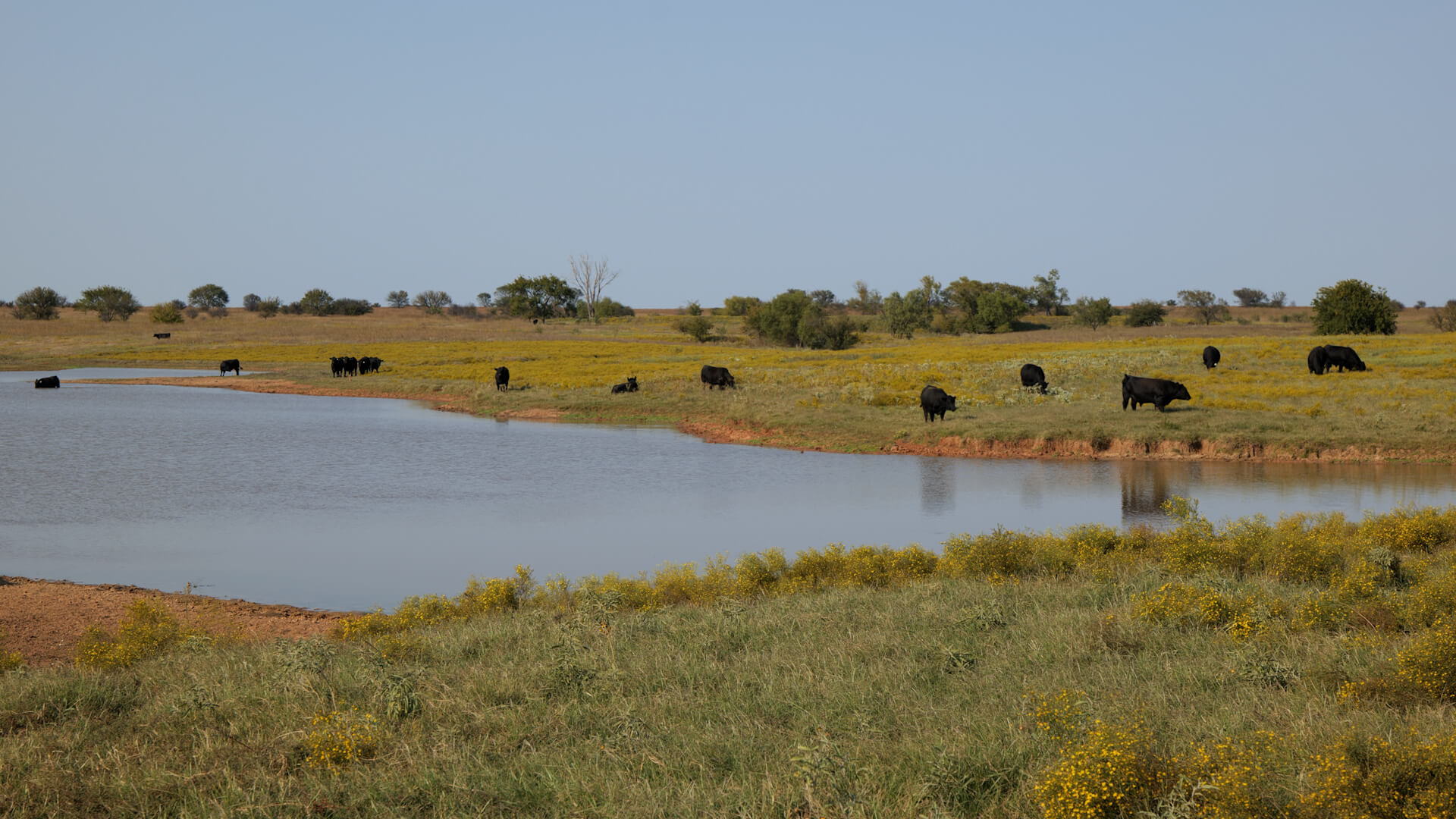 Here in Texas, one can get a close-up view of what’s become a war of conservation versus an animal that is smarter, stronger, and more ravenous than anything else out there. It’s estimated that 41% of the US feral hog population resides here. Recognizing a growing problem that had existed for decades, the Texas Parks and Wildlife Department first began removing wild boars in 1982. Since then, and with State and Federal officials taking aim at the feral US sounder, the population is still estimated to have exploded to ten times what it was back then.

In an attempt to manage the wild hog problem, states, counties, and even federal agencies have come up with different methodologies. These include hunting, trapping, sterilization, and poisoning. To reduce the problem for the long term, it’s generally understood that 60-80% of a regional population has to be eliminated every year. Hunting alone appears to remove up to 23% of a local population, which means it has a place in a management program that includes the other methods. Because it’s fun, easy, and basically provides unlimited quarry while also providing a service (not to mention a source of food), hunting hogs has expanded all over Texas and the other states where hogs are plentiful. Hunting with guns provides very localized relief, and for a limited time. But done the right way, it can prevent a sounder from destroying acres of farmland. To have good effects on a sounder, it takes many guns, and many rounds. Because most feral hogs are active in periods of darkness, there’s the added element of hunting at night with thermals and NVDs, which adds another layer of fun to the effort.

In reality, there is little restriction in terms of hunting these hogs in Texas. Texas allows hog hunting year-round with no need for a license. With no limit, you can use night vision, thermals, semi-automatic rifles, bows, and traps. Plus, there’s a booming business of helicopter hunts. But all of that isn’t enough. At the moment, we’re close to a 40% kill rate. In order to just keep the population level, that rate would need to be at 66% – and that’s just to remain even. 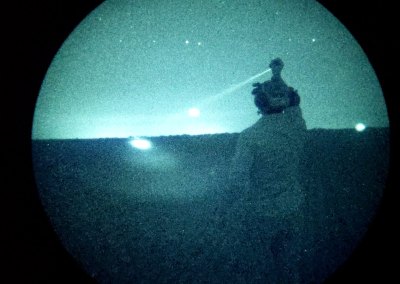 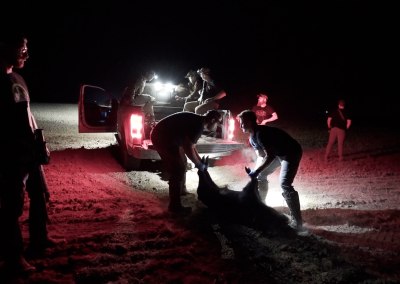 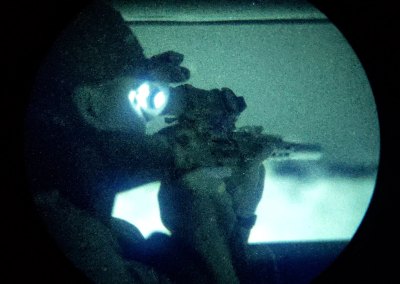 Scanning for a sounder of swine

One of many hogs.

We’ve got plenty of hunters at Magpul who hunt wild boar, especially down in Texas. However, to get a closer look at the damage they cause and the local approach to managing their numbers in smaller geographies, we sent a few guys to Waurika, Oklahoma, which has a huge wild swine population. We teamed up with Tornado Valley Outfitters, who, when they’re not running guided hunts for deer, ducks, geese, cranes, and dove in Texas and Oklahoma, they lend a helping hand to local farmers by taking out as much of the local hog population as they can. They have a standing agreement with their neighbors; they’ll do their best to minimize the damage caused by these hogs…as long as the neighbors aren’t alarmed to see groups of hunters on thermals sending subsonic rounds in the dead of night.

Trent Jones and Matt Hale guided us during our time in Waurika, giving us a tour of local damage. They’re experts on how these animals are affecting the local ecology and population, as well as the measures in pace to help minimize damage. Before we got our gear straight for the night stalk, Trent drove us to several different plots of land where local farmers and ranchers were having particular trouble with hogs. We’d be back again when night set in with the plan to offer some night system and suppressor-enhanced hog population management.

We had a total of six shooters and three guides, each equipped with an AR platform rifle mounted with thermal sights and firing either a 308, 7.62×39, or a 6.8spc caliber round. These larger caliber rounds are optimal, requiring fewer hits on one target, but many people still find success using 5.56. We also brought along some rifle tripods and shooting sticks to give us a sturdy shooting platform for consecutive accurate hits on moving targets. With plenty of ammunition, batteries at full charge, and locations set, we piled into our pickups and set out. In our three-truck caravan, we approached the general area of land that farmers had asked TVO to keep an eye on and scanned it with thermal sights until we spotted a large sounder of 50-80 hogs. Stopping about 500-1000 yards out – depending on fence lines – we’d stalk to a vantage point where we could establish a firing line.

When shooting into a large group of hogs, we’d keep as many in the kill zone as possible by starting with the furthest ones in the group. Particularly when shooting suppressed, this causes the rest of the animals to move away from the sound of that first impact and -with luck – towards you. This helps reduce a little of the chaos of a group of hogs sprinting away in fear.

We had the opportunity to stalk a group of hogs five separate times. With the same routine, we went from spotting a glowing white or black mass through the thermal, to a slow and deliberate stalk, to working as a team trying to contain the group of hogs. Each time was as exhilarating as the last. After shooting late into the night, our group finished up at around 4 AM. Our tally was of 52 hogs, which is a pretty significant haul for a such small area. 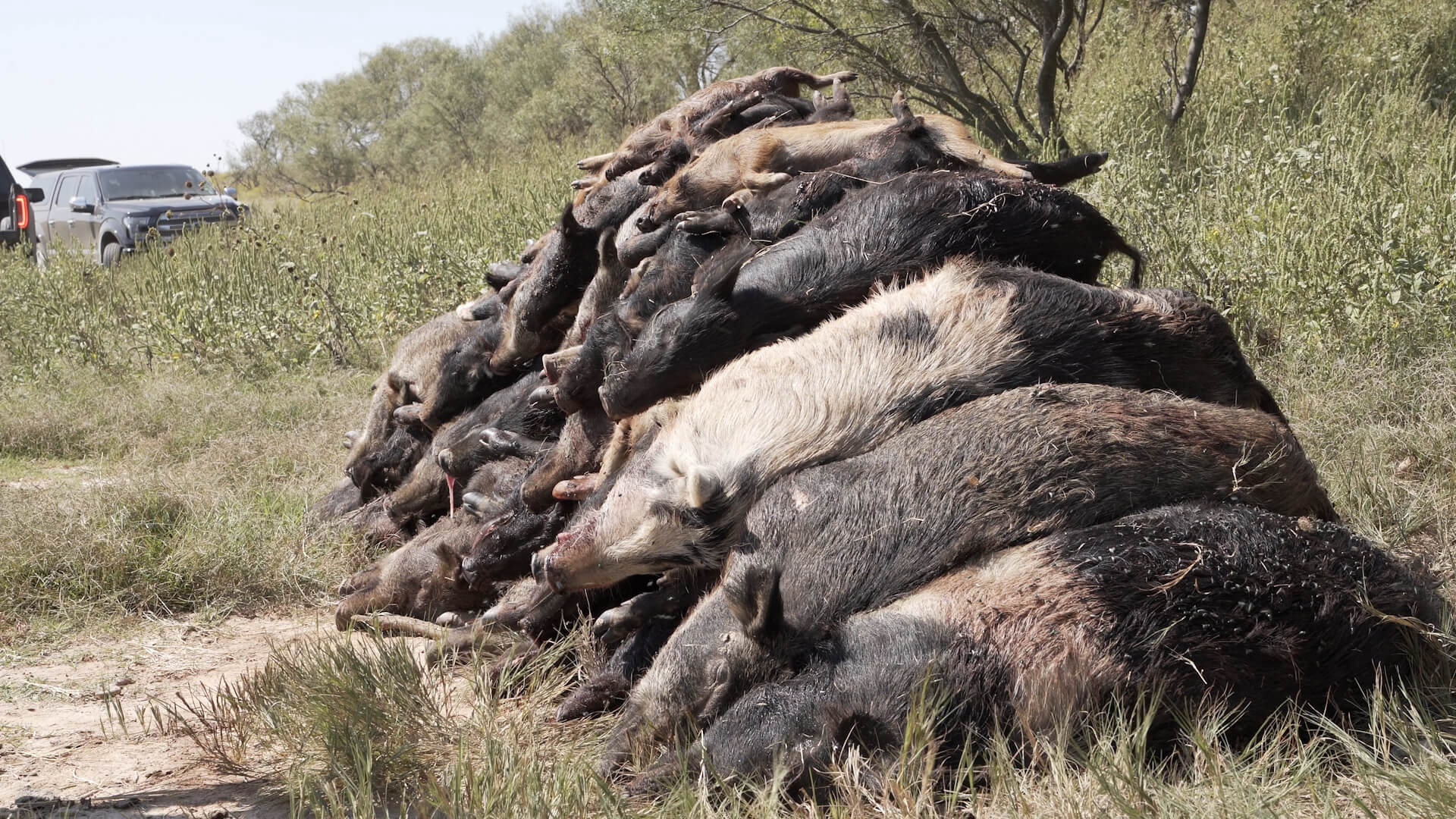 While the main concern with feral swine is getting the population under control, there’s a lot more that can be done both before and after the kill. At the heart of this issue, we’re still acting as stewards of the land, and a large part of that is preparing and being resourceful with what you shoot. Shooting hogs is only one part of what needs to be a larger combined effort. In the coming parts of this series we’ll touch on other control options as well as the growing “farm-to-table” community and what you can do with your haul after you shoot it.